Sick and disabled people are

being pushed off benefits 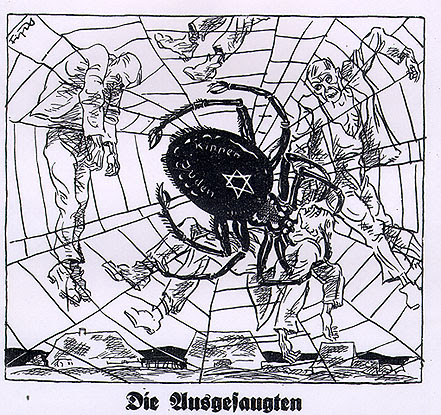 Explanation: The caricature suggests the Jews are sucking the economic life from Gentiles. It is one of numerous Stürmer cartoons comparing Jews to inhuman and unpleasant creatures. (February 1930)

How the Political classes see the sick disabled and the unemployed
they use them as the reason for our economic decline scrounging
money from the hard working to keep the bone idle in welfare.

The disabled to prove they are a productive part of society
must in the UK today have a job any job. But the reality of
discriminating world we live in too often just doesn't make it
possible for them to enter into the world of work.

If every  job vacancy was filled tommorow there still would
be mass unemployment and the Unemployed would stilll
be under attack from the Political partys.

The fact is every political party use the those in receipt
of any benefit as a drain on the nation all across the politcal
spectrum.
from the English Conservatives to the Scottish snp
the Labour party  the Lib dems the only difference is
some would give a little and the others nothing or
as nears as possible.

and the undeniable truth is they are using the same strtaegy
as the pre war Nazis to vilify and demonise the Jewish
people and lots of people in the UK are agreeing with them.
Posted by Nikostratos at Tuesday, July 31, 2012 3 comments:


Ten things I miss about the 20th century

Smoke everywhere, lovely great lumps of concrete and chirpy bus conductors – just some of the things I liked about the good old days 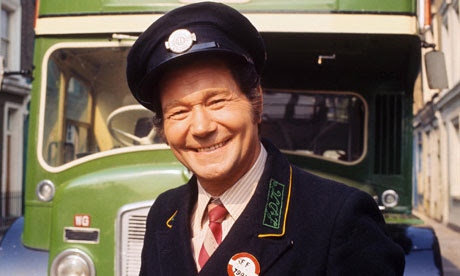 Ding-ding! Reg Varney as Stan Butler in On the Buses, 1971. Photograph: ITV/Rex Features
1. Vocalised cheerfulness I'm not saying people were happier in the 20th century; they weren't. There was a lot to contend with: war, TB, no bass end on record players etc. But there was more public cheerfulness. People would sing out loud just walking down the street. Try doing that now and see if passersby make eye contact. Remember bus conductors? Chirpiness was a required skill then for a Routemaster crew. Passengers were often treated to a "soundclash" – the conductor perhaps whistling the latest Tommy Steele, the driver loudly crooning something upbeat by Edmundo Ros. It was a bit like nowadays when you get teenagers at different ends of the bus playing syncopated misogyny on their phones, only happy instead of angry.
2. Coal Yeah, I know it killed half of us, but I miss the smell of coal smoke. It used to be everywhere, belching out of trains and chimneys, atomised, inhaled. Most people were addicted to cigarettes too. Everyone died smokey bacon flavour. Buildings were agreeably shrouded in grime. Fog was thick, like a sodium-yellow blanket. Of course we older people are kicking ourselves that we didn't put some soot away for the future. Now it goes for up to £3,000 a scuttleful and is keenly sought after by billionaires, who dress up like the cast of Mad Men and snort it through 10 bob notes. Sooty the hand puppet, he was from a more innocent age too.
3. Proper weather The climate's been broken for years (see "Coal" above, soz) but it can't be fixed because NOBODY DOES REPAIRS ANY MORE.
4. Having a pint with a racist Maybe it's the invisibility of old people, but I rarely "fall into conversation" with morons in the pub these days. It's what happened in the golden age before we had mobiles to check. There'd be a neutral remark about the weather and before you knew it some sullen clump of sideboards and tash opposite would be blaming "them" for his early black-and-white version of Broken Britain. Then you'd have an argument while you drank your pints and it seemed quite important to engage and challenge. Today, if anyone says anything racist the protocol is to smile, pretend to go to the toilet, tweet "Oh my God, there's a totally racist dude in this pub", then covertly film them and hope they say something YouTubeable.
5. Women's liberation So much clearer then: men are shit, we've ruined everything, stand aside, woman's right to choose, equal pay, non-patriarchal parenting, loose clothes. Now feminism's tribalised it's much more confusing. Julie Bindel's lesbo resistance or Caitlin Moran's cock-based irony? Both, obviously. But I miss the days of free thinking and reparations, when New Men did all the cooking and were more than happy to be sexual playthings, although to be honest my mind's wandering a bit now.
6. The majesty of concrete Lovely, egalitarian, optimistic great lumps of concrete, eg the Hayward Gallery, were going up on the South Bank at about the time the Kinks released Waterloo Sunset. We were in paradise.
7. Haughty television Never mind Starkey, Schama and all the other clever dicks with their blousons and gesticulating on battlements and meticulous reconstructed scenes because apparently we can't be trusted to use our own bloody imaginations any more. Before colour telly, AJP Taylor could talk into a camera for an hour armed only with an immaculate brain, a glass of water and 10 Woodbine.
8. Working-class MPs We used to have loads of them. Working miners became union reps, discovered a natural gift for turning rage into oratory and were duly elected as parliamentary tribunes for working people. Dennis Skinner's still there like a pissed uncle at a funeral, but who remembers Coventry's Dave Nellist? When he was an MP in the 80s he insisted on taking only the average wage of skilled workers in his constituency. The rest he gave back to Labour, who in return expelled him for being too militant and then waited gormlesssly for Neil "The Welsh Mussolini" Kinnock to become prime minister. Today our House of Commons is just the Members' Pavilion at Lord's without the hats.
9. Counter culture These days it's all "meta" or "pop-up" and I'm not entirely sure what they are. Oppositional thinking's too sophisticated now. It was all much simpler when culture had three gears only and a puncture repair kit in the saddlebag. Ah, Spam sandwiches, orange squash, purple hearts … sorry, mind's gone again.
10. Non-monetised public space The internet saw the last century out and this one in. Early on there was great excitement about "virtual reality" yet who could have foreseen REALITY TURNING INTO THE INTERNET? A journey through London in 2012 is like navigating your way from one JavaScript nightmare to another in the days before ad blockers. Every available square inch of public space, every cubic foot of public air now has to be jizzed over by flickering ads and corporate branding. And looming above it all the grotesque Shard, our capital's latest and most disgusting lump of privatised skyline. Capitalism giving us a scaly, taloned middle finger. What next – sponsored clouds? Toll pavements? Paywalled churches? Sure, it sounds ridiculous but you mark my words, soon they'll be charging us to get into St Paul's Cathedral. Oh.
Charlie Brooker is away.